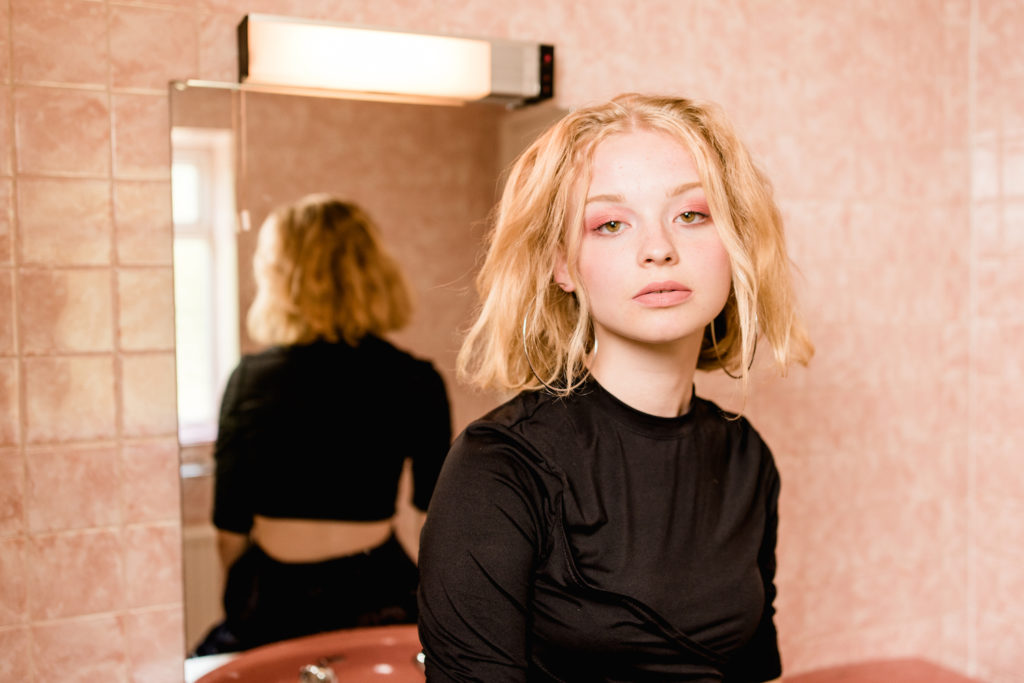 “I’ve always wanted to be a stormchaser. I want to be that person that chases storms and does all the photography and takes really sick photos.”

Millie Turner has a pretty mean plan B if this whole music business doesn’t work out. On the eve of the launch party for her latest single ‘She was a Dancer’, Millie’s excitement is palpable over the phone, and her voice rings with an infectious enthusiasm. She’s 18, just finished school and ready to pop the champagne at midnight.

Think of yourself at that age: everything is lying ahead of you in all its wonderful possibility and endlessness – then imagine it magnified, amplified and rippling with thumping feedback in the form of almost 300 thousand hits on YouTube. It’s a pretty good place to be the week before your A Level results come out.

The video for her latest release, ‘She was a Dancer’ opens with a cloud of exploded pink candy dust, an addictive bass-thwomp and a cool aesthetic to match. Set against the urban concrete jungle of the Alexandra Road Estate in Camden, this is a music video which is every bit for the eyes as well as the ears. Working with a professional dancer in the piece, Millie moves with playful, self-assured, almost submarine movements that work perfectly with the tempo of the song.

“I wanted to capture that feeling of liberation and expression in dance and be able to communicate that to people so when they listen to it they feel like they can dance, and they have that same feeling of empowerment through movement.”

The song plays with loops and repetitions, mirrored images, and a long, languid, drawn-out summer anthem sound that is distinctly recognisable across her music. Millie writes positive songs that have real meaning for her fans near and far. “I’ve so many people in different parts of the world I’ve never visited listening to my music which is so awesome. Just knowing that you’re making a difference to someone’s life, and making their day better or just that one moment they hear your song – that’s pretty nice. I really value that.”

“I remember my first gig I ever did, afterwards this guy came up to me and said this is my first week in the UK and I was really stressed about it, it’s all very new but you just made me feel so much better- and those kinds of things that people say really make it worth it, ‘cause you just know you’re making a difference.”

Millie’s musical background is home-grown, having been encouraged by family and people in her extended community to not only play piano and sing in groups, but take centre stage and focus on her own music. “I was definitely kind of used to being able to create music that didn’t always have to sound good, but doing it with a group of people, that was something that happened from a young age. I didn’t really think I could sing at all, I would never be the one singing.”

It was through a family friend and a few sessions focusing on what they could do that ‘Underwater’ was made. Released just over a year ago, the upbeat single has drawn comparisons with Maggie Rogers, and sets the tone for the kind of music Millie likes to explore. She cites a range of other influences from David Bowie to Loyle Carner and Aretha Franklin, but keeps coming back to other contemporary female artists: Paloma Faith, Lorde, Bjork.

“I think there’s a new movement of young female artists doing what they want and making their own moves on things and not being influenced by labels or other dominating ideas . It’s such a privilege to be part of that.”

And the rest of the summer is looking bright. Millie will be flying to Berlin to shoot a music video and working on her next EP. She’s supporting Alice Merton in London and Manchester in September, and playing gigs in Hackney’s Paper Dress Vintage over the autumn.

“I’m not gonna lie, I feel like everything’s going too well. It was an intense period with no focus on music, literally just trying to get my grades. But now I’m just able to do what I want. It’s so liberating. I can’t even explain how excited I am, it’s unreal. This never really was the plan.”

Millie, if I had one word of advice about your upcoming exam results? Screw the careers advisors, they’re always wrong. Keep doing what you’re doing, making music and art and following the unmade plan. Don’t just chase those storms girl, make them.