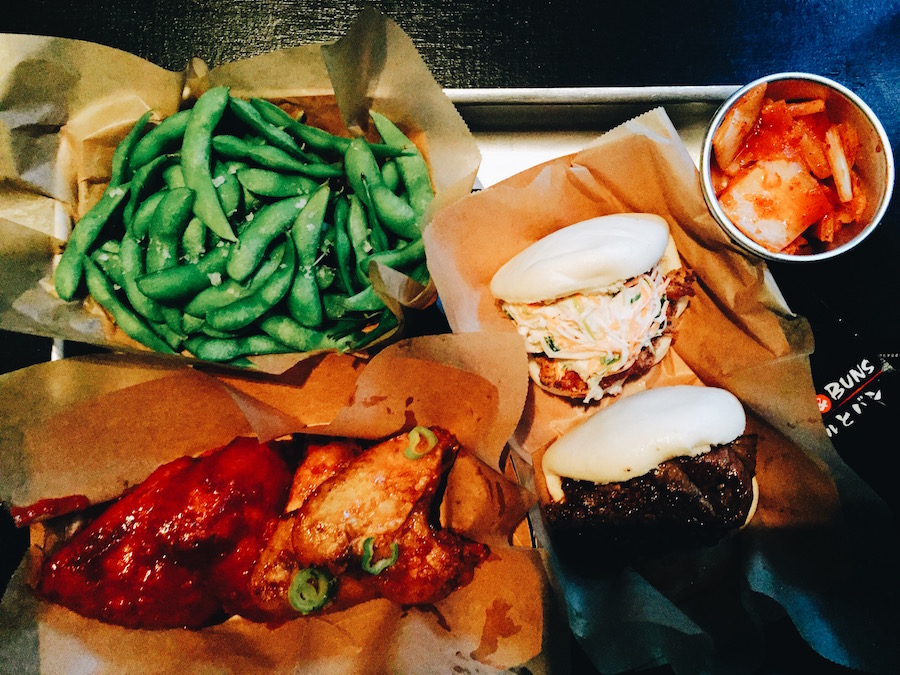 Open since February 2015, Beer and Buns has fast become one of London’s coolest (longterm) food pop ups, serving chilled Japanese craft beer and delicious hearty grub. Located above K10 Sushi Bar in Broadgate, you may easily miss this little gem, but lookout for the neon sign and ascend the stairs to the right.

This Izakaya (a type of Japanese gastropub) serves fluffy hirata buns that will have you smiling from ear to ear, while other stars of the show are the triple fried jumbo chicken wings which are (depending on your choice) sweet, sticky or hot – but overall just divine.

The cool vibe is consistent throughout, casual, with a dark interior and low lighting. All service happens at the bar (including picking up your food). There is often sport showing on a big screen and a general hubbub as the place starts to fill up with the after work crowd. You can stand at a barrel and drink or wait for a bench to sit before opting to order some food,  the choice is yours.

We couldn’t write about this place and not mention the sake bomb. The sake bomb ritual involves placing a cup of sake atop two chopsticks, which themselves are placed on top of a pint of beer. The drinkers then shout ‘sake bomb’, slam the table causing the sake to fall into the beer before proceeding to drink the whole drink. Funny to watch and next time, when it’s not a school night, we’ll be giving this a go! Go along, play fussball, have a laugh and inhale some quality beer and buns.