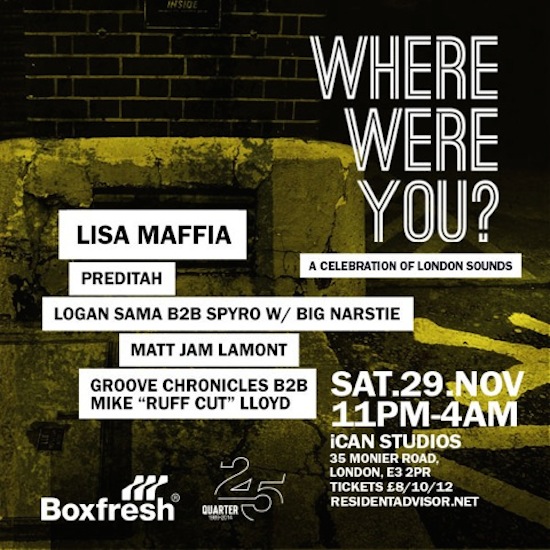 With 2014 almost over, the Boxfresh 25th anniversary celebrations are coming to an end. But not before they finish off the series in style, with a night that will honour the history of London’s grime and garage movements.

This Saturday (29th November 2014) Boxfresh is putting on a night of old school sounds from some of London’s most influential grime and garage acts for the finale of its 25th anniversary. Boxfresh Where Were You? will see the likes of Lisa Maffia, Preditah, Logan Sama, Sir Spyro, Big Narstie, Matt ‘Jam’ Lamont, Groove Chronicles and Mike ‘Ruff Cut’ Lloyd head to iCan Studios for what is sure to be a night to remember.

A party dedicated to the seminal artists and sounds that have sound tracked the past 25 years, Where Were You? is a retrospective look through the music movements which began in London’s underground scene but are now a fundamental part of the UK’s music heritage. Heading back to where it all began, in the heart of London, Boxfresh invites you to celebrate their 25th anniversary.

How much? Tickets start from £8 via Resident Advisor

For more info on the Boxfresh 25th anniversary and to shop the limited edition capsule collection visit Boxfresh.com