The anticipation is risin’, so we ain’t compromisin’. When it comes to music that’s phenomenal, we look for something Astro-nomical!

Ok, so we at Tinman London aren’t very good at rapping, but we can’t help but be inspired by a pretty special musician. Astro, aka The Astronomical kid, aka Brian Bradley, has experienced a meteoric rise to fame since his appearance on X Factor USA in 2011 and it doesn’t look like the momentum is stopping anytime soon.

Polite, well-spoken and humble, Astro’s badass stage persona is strictly self-prohibited. The parental advisory sticker on his bedroom wall applies only to his lyrics, not our interview. Like a lot of his Brooklyn brothers, from Jay-Z to Mos Def, all the way to the UK’s own adopted Huey Morgan of Scooby Snacks fame, Astro is talented, but not pretentious.

He’s been making music, collaborating and recording professionally from the age of ten, but been “writing music forever.” Astro’s inspiration? Let’s just say he’s back to reality. “Not so many fantasies. I try to write about things that I see every day, that I go through or that the people around me go through. Real life basically, that’s what I’m trying to make.”

Reality, however, is a far cry from reality TV. Was the experience really as full of the glitz and glam that we see in the cut version? “It was entertainment, you know? A great opportunity, and it helped me to see my career on a different level.”

We hear horror stories of good artists getting played by the money makers in TV talent shows, but this wasn’t the case for Astro. “I had a manager before I went on there, and it was cool. I mean, we had rules but it wasn’t nothin’ crazy.”

“I can’t speak for anyone else, I just went on there, wrote my records, performed them, that was it,” he explains. “Everything else that happened was just behind the scenes stuff that didn’t really have anything to do with me.”

And now, two years on, Astro is focusing on his future, not his past. “I don’t want to be one of those contestants who leave the show and then go and perform somewhere else, months later like, ‘X Factor’s own!’ I have a different audience now.”

“Don’t Tease Me” By Astro

When it comes to handling the pressure of being in the spotlight, Astro cites his humble roots for keeping him sane. “It depends on who you have a round you. I’m from a ghetto area, but I think it’s worse for kids who grow up privileged. I‘m still out here in Brooklyn, and I‘m just trying to make music.”

And keeping a good support network of people made all the difference for Astro when it came to handling attention the X Factor brought: “I didn’t have yes men around me, I’ve had people that I knew for years, and we’ve been grounded since before the X Factor. You have some young stars who feel like they have to display their entire life in front of the media. I‘m just making music and that’s what’s gonna keep me level-headed.”

If he had to work with the greats of the genre, who would he choose? Jay-Z and Snoop Dogg, both feature on the list, and luckily, Astro has already worked with some of the best producers on the scene. But, he explains, “I’d work with anybody if it sounds right, it‘s not really about a name to me. As long as it sounds right I’ll work with them you know?” 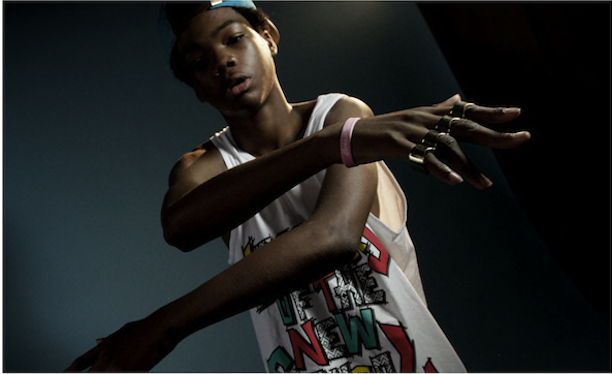 Being in Brooklyn certainly has its advantages: “Statik Selektah lives right down the block from me. He’s very easy to work with, a really mellow dude, amazing with his beats and I respect him a lot.”

And it’s not just East Coast beats that inspire Astro’s sound, he’s been working with a new producer who hails from California – Sammy J – on Astro’s upcoming EP, Computer Era. “He’s still got that New York sound that I’m lookin’ for, which is funny cause he’s from California.”

As well as working on his new EP, Astro has been focusing on his acting career. This year will see two new releases starring the young rapper, Earth to Echo and A Walk Among the Tombstones.

Earth to Echo is directed by Dave Green and Astro describes it as: “a mixture of E.T. and Super 8.” While the hotly-anticipated novel adaptation of A Walk Among the Tombstones stars Liam Neeson, who was “great to work with”.

2014 is set to be a good year for Astro. He’ll be performing in Washington with one of the greats, Snoop Dogg, in April. That alongside a brand new EP and two films coming out this year? He is set to be Astro-nomical.