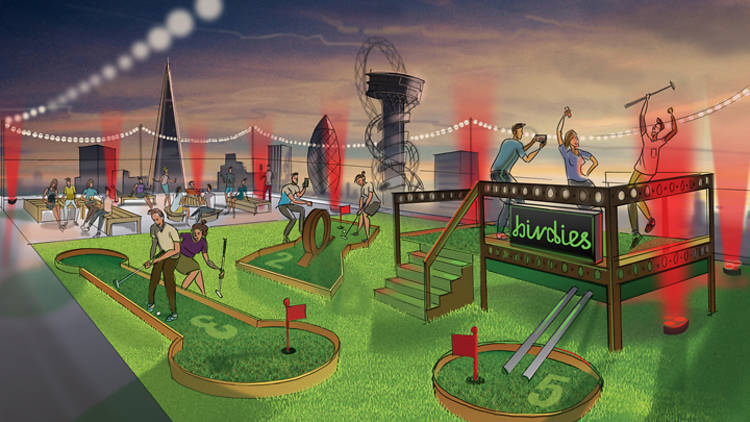 We’ve had rooftop dinners, rooftop cinemas but now everybody’s favourite summer sport, golf is making its way into the sky. Birdies Crazy Golf pop-up first appeared at The Vaults in Waterloo last year, but now they’re heading to the rooftop of a multi-storey carpark in Stratford, E15 for Summer 2016.

“London’s sell-out subterranean golf experience, Birdies – visited by more than 15,000 budding putter-punks in November and December last year – will make a triumphant return to the lofty greens of Roof East, high above the streets of Stratford this Summer.

Birdies Rooftop Crazy Golf, from the kings of pop-up cinema Rooftop Film Club, promises a Summer season of crazy golf with altitude, delectable cocktails from mixology masters Spirited Mixers, a new lip-smacking menu of RockaDollar Dogs from Hawksmoor Knightsbridge Head Chef Richard Sandiford and a swinging schedule of resident DJs, all whilst enjoying London’s sun-drenched skyline. Open from 2pm at weekends for families and early birdies all the way to 10pm for golfing night owls.

A challenge for even the most confident of swingers, the bespoke nine-hole course, serves up loops, half-pipes, hidden putt-off prizes and an elevated 5ft drop onto the sixth hole.”