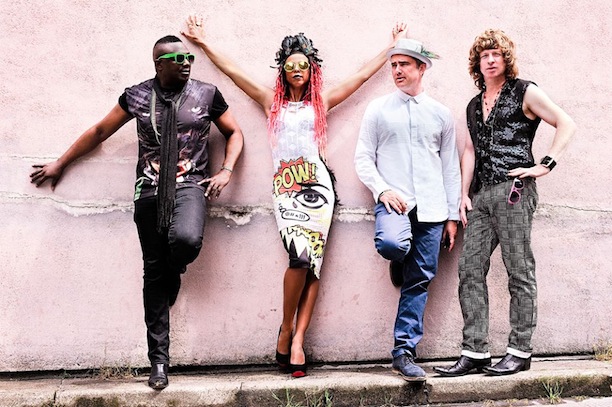 Playing at the London Jazz Café in Camden to promote the 2014 release of their new album, The Brand New Heavies brought some funk to an otherwise typical Tuesday night (11th December, 2013). Dawn Joseph, the brand new leading lady of the Heavies, descended down the balcony stairs and onto the stage of the infamous Café. Robed in full-length glittering black, topped with a sparkling silver headdress and winged sunglasses, she immediately hooked the crowd with her slightly mysterious edge. But stuffy, dressed-up-diva she is not. Iced out in silver bling, she’s every bit the seasonal songstress.

And how do the originals feel Dawn fits into the band? “She is a great live and studio performer and talented songwriter with a unique sense of style. We love individuals with a strong personality that fits into our mix, we are all strong individuals but together we make something really interesting and creatively, we all feed off each other.”

“Dawn has been very well received by even the most hardcore Heavies fans at our live shows, she didn’t get to fully shine on the last record as it was almost done when we met but this one has been built with her from the ground up and is a very strong unified-sounding record.”

With original members bassist Andrew Levy, drummer Jan Kancaid and guitarist Simon Bartholomew, there were eight Brand New Heavies getting on down to disco onstage. “Are y’all feelin’ funky tonight?” A Bee Gees-inspired Bartholomew asks the audience. Think 70s hair: brown, bobbed and banged, along with rounded sunglasses and a denim vest to complete the look.

Opening with a cover of Peter Gabriel’s ‘Sledgehammer’, they played with an energy that lasted the whole evening. Second track in, and the sunglasses are coming off for Dawn. Youthful and bright she breathes life into the band, commanding the stage she sings: “Never stop, never give it up” while casually undressing to reveal a South African flag dress emblazoned with Nelson Mandela’s face smiling out at the crowd.

Levy’s soul-fired bass lines transition between songs, supported by a brass section that sounds like it’s soundtracking a car chase in Starsky and Hutch. Kincaid leads the way on the keyboard, taking us up and down the octaves and putting us entirely at his musical mercy. Dawn glances around the room and cheekily asks the diners: “How’s the food? Does it sound ok by the way?”

Unexpectedly, she leaves the stage and the band continue: “I guess someone’s left the stage so it’s instrumental time.” Bartholomew jokes: “I’ll be doing my Bob Dylan set soon, back to the stage you come…” he beckons Dawn to join them again. And there she appears, bright and colourful, hair down, dip-dyed pink to match a tie-dyed jumpsuit.

As it turns out, Dawn makes her own costumes, inspired by 1920s elegance and 1950s sass: “I’m very influenced by Grace Jones too. My style is classic mixed with fetish and gothic overtones. I like to be a bit outrageous and sexy but always classy – never boring.”

The Brand New Heavies have a good level of chemistry. Their sound generates this wonderful energy, as if the whole room is being transported back 40 years to a time when mutton chops were acceptable and the goldfish in your platforms were still alive and swimming. How is it then the Heavies can still produce fresh material after all these years? What keeps them stayin’ alive?

“I think we’re just better at what we do, we’ve always grown organically and not forced changes but have changed as our influences have been explored and assimilated into our sound, we’ve honed our craft and with years of playing.”

Dawn’s mid-show costume change has made her loosen up, now she’s trying less to seduce us and more wants us to have fun along with her. “So now that we got you mellow, we wanna get you the other way: let’s go rave a little, have fun and get down.” When they bring it up all we can anticipate is that next drop, that beautiful descent into disco.

The slightly more subtle percussion sounds played out do get a bit lost in the funk throng, but the overall rhythm is enough to shake the room and keep the audience grooving. “Are you guys as sweaty as I am?” Dawn asks. And looking around, it’s certain that at least seventy percent of the crowd will go home and get a little bit funky. The power of disco, eh?

“Bring on 2014.” The Brand New Heavies tell us. “We want to be out there playing our show, reaching people with our music as far and wide as possible, and hopefully injecting some positivity and good vibes into this world.”

Here’s some footage of their recent gig at the Jazz Café, London.