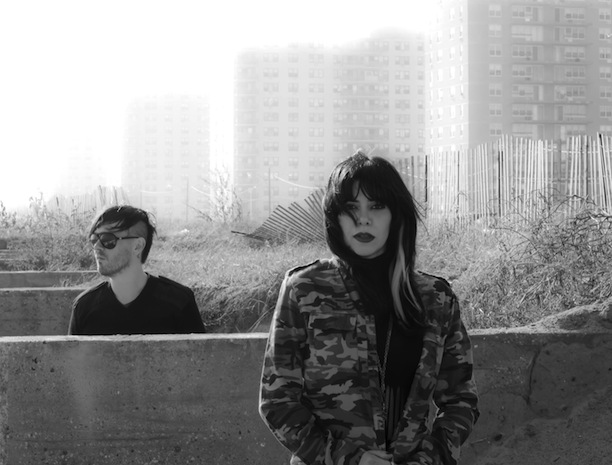 It’s Black Friday, and overstuffed turkey-fed online shoppers have crashed the internet. At least, that’s my theory as to why I can’t Skype or video chat with NY-based Zohra Atash and Josh Strawn from Azar Swan. What we settle for instead is an old school Gchat convo. And although it’s no MSN and doesn’t quite have the same Jokerman font-feel, complete with animated emoticons, Zohra and Josh more than make up for it with their topical and colourful conversation.

“I stayed up ‘till 6am giving thanks, so I’m a bit blurry right now,” Zohra tells me. Her parents moved to America from Afghanistan, and Zohra grew up in New York. Josh hails from Virginia, but his musical career took shape after he moved to NY in 2004, the city they both now call home.

So what are their thoughts on the all-American Thanksgiving tradition? “It’s interesting,” Josh tells me. I can get a bit fed up with the (admittedly well-intended) barrage of anti-colonialist/anti-consumerist agitating that goes on around Thanksgiving. I recall Zohra explaining to me that Thanksgiving is a good, American holiday for immigrants who aren’t Christian… insofar as her family, who are Muslim, found it rather easy to say: “hmm, food and family? No Jesus? Cool, we can do that!” So we have politics, religion and hangovers creeping in already? This is going to be an interesting conversation.

Having been friends for almost ten years, Zohra and Josh have been making music together for about half that time. “It started off as pretty casual, like: hey would you listen to this and tell me what you think? And it snowballed,” Zohra tells me. Alongside Azar Swan, the two have collaborated on other musical projects, including Religion to the Damn and Vaura.

Zohra grew up singing in a choir, but was never classically trained as a singer. “Once I feel my way around something I leave the nest, and by nest I mean stop showing up to class,” she says, hinting at a rebellious streak when it comes to playing by the rules. Similarly, Josh attended guitar lessons for a couple of years and played saxophone in his high school band, but he carved out his own musical path after that. And where does his rebellion kick in?

“Studying sociology at Virginia Commonwealth University – which is to say Marxism – those were the classes I chose. Then I came to New York and studied at The New School, which was home to the Frankfurt School intellectuals after they fled the continent.” And there we go. But does the political soundscape present in his previous musical collaborations, like Vain Warr and Blacklist, play a part in Azar Swan?

“In Azar Swan, the subject matter is about 98 percent Zohra.”

“Well, I write the music and lyrics, Josh is a sounding board really. We workshop and bounce ideas, he’ll challenge me.”

“Yeah, the two percent would just be how I might bounce something of hers back at her.”

“Or she might tell me about an idea or a lyric and it might give me an idea for some small contribution, but it’s really all about her vision. I might tell her what aspects of her ideas really move me.” 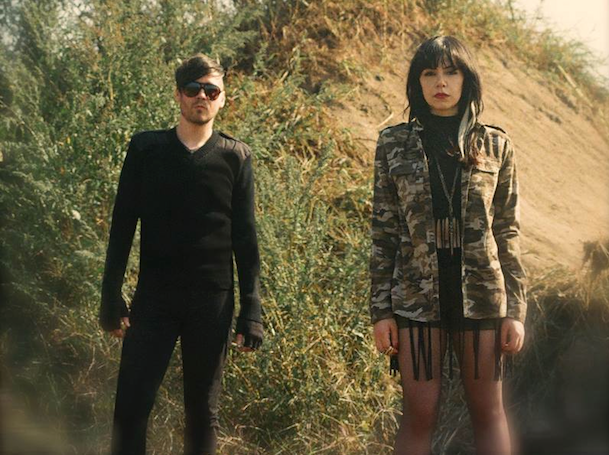 Azar Swan seems then to be a collaboration of contrasts, with Zohra and Josh each bringing different tastes and ideas to the project. “This marriage of non-mainstream synth sounds and collage with radio production had always been the goal,” Josh tells me. But at the same time, Zohra didn’t want her vocals lost “in a wash of effects”.

They’re trying to wok with the methods of pop, not against them, to produce a sound that “could come on Top 40 radio after a Rihanna song, in terms of the mix and master.”

Josh explains that they wanted to use some of the heavy synth and subs from pounding industrial rhythms, but let their sound maintain a sheen of contemporary pop. And that’s how it works for Azar Swan. In their latest LP, Dance Before the War, we hear a fusion of 80s pop cymbal smashes in one song contrasted with a dangerously sexy bass loop, then vocals that change from being sweetness and light in one track, to loud and brash in the next. It has elements of pop that all great pop records have had, but is layered with modern sounds that ensures it isn’t restricted to any one genre of music.

“I have never been able to understand that,” Zohra says. “I don’t know the difference between house and dubstep, it’s all just silly to me. Everything gets a name – hardcore, slowcore, sludge – who can keep up?”

Yet Zohra still feels a resistance towards a lot of contemporary pop music: “I am not a Rihanna fan. Never could stand the site of Lady Gaga. As far as I’m concerned, she took the fun out of rock ’n’ roll pageantry. I don’t mean to be rude, and I have strong opinions, but I do totally respect other people’s taste.” 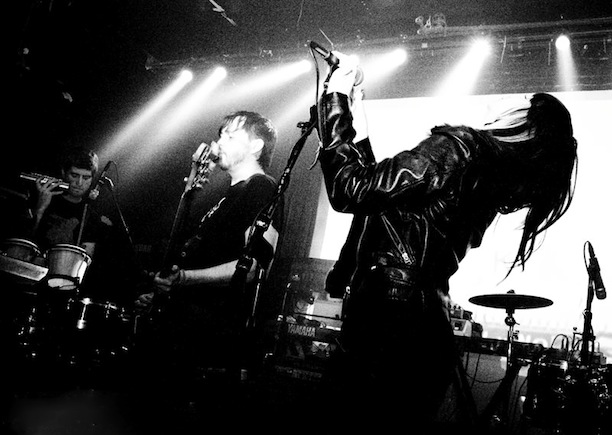 “I think her music would be perfect for a montage scene,” Zohra says. “People are making music they can sync end credits to, or: ‘I need to write a song about a car, and get some big bucks.’ I say it with a smile on my face,” she adds.

Josh thinks that Azar Swan’s music, however, would take on a different kind of soundtrack form. “There is something in it that’s sort of soundtrack-ish, but in a different way. A lot of recent action and fantasy films have embraces these big drum sections – like taiko drums – and I’m never thinking: ‘Oh let’s make it sound like the battle scene from Game of Thrones,’ but I think there’s some affinity there.”

Soon enough we’re discussing other British exports. Ricky Gervais’s politics get a mention from Josh, which Zohra doesn’t quite care for: “He’s such a tool. He operates purely creating an embarrassing situation, the third party humiliation thing. The Germans have a world for it – fremdschamen.” Josh quips back: “He might be a bit too much of a God-hater for Zohra’s taste LOL.” Peep Show on the other hand? We have a winner. “Plus I love that Harvey Danger song,” Zohra adds.

Azar Swan have been touring this year with one woman wonder, Delphic Oracle. “It’s nice to go out on the road, it’s completely different to playing the town you live in,” Zohra explains. “For me, it’s immediate gratification or humiliation. At the stage I’m at, I’m really trying to win people over, they aren’t all coming with their minds made up that they love me, so it’s like an awkward first date. It’s tough but I don’t like anything that comes too easy.”

As our conversation comes to a close, we get back to the music and so theres no better time than now to introduce you to Azar Swan‘s latest electronic-goth-pop self recorded album, Dance Before the War. Available in its entirety below.