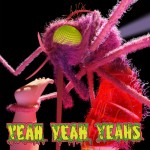 New York trio Yeah Yeah Yeahs have just released ‘Sacrilege’ to preempt the release of their new album, Mosquito, which is set to drop on April 15th (and the 16th for you Americans).

Apparently this new album is even meant to feature a choir to compliment the harsh vocals of lead singer, Karen O. This is quite a splash considering the group’s four years of silence but it will grow on you if you listen below.